I have been a Guns N’ Roses fan since they hit the music scene back in the 80s. Appetite for Destruction was a groundbreaking album with head banging tracks like “Welcome to the Jungle”, “Paradise City”, “Nightrain”, “Mr. Brownstone”, and, of course, “Sweet Child O’ Mine”. My wife is an even bigger fan of GNR, specifically the guitar slinging Slash! So when she discovered that Slash featuring Myles Kennedy and the Conspirators were playing The Studio Coast in Tokyo, acquiring tickets was a forgone conclusion. We both agree that Slash is our favorite Gunner. He is rock star cool and never says much, but his guitar can talk and boy does it talk! According to Brett Callwood in an article for LAWeekly, “Slash is somehow simultaneously one of the coolest motherf***ers on the planet and one of the most humble.”

Our flight left Misawa the morning of the show and we landed in Tokyo about an hour and half later. Believe it or not, flying is cheaper than taking the Shinkansen (Bullet Train). We got to Tokyo fast, but it seemed to take longer to travel from Haneda Tokyo Airport to the actual city of Tokyo. True confession here…we took the wrong bus and ended up doubling back to Narita Tokyo Airport. I accept full responsibility for that faux pas. We did, however, arrive at our hotel with plenty of time to relax and prepare for the show.

Slash featuring Myles Kennedy and the Conspirators was a completely different  concert experience. It seemed as though all rules were tossed aside and everyone just rocked!

The show was at Shinkiba Studio Coast Tokyo, which was about an hour from our hotel via the Tokyo Metro Subway.  It’s location is off the beaten path. A cab from our hotel to the venue cost close to $100 one way. The subway is the cheapest way to travel in Tokyo. So twenty dollars, a couple of trains, a short walk and we were ready to rock. Slash and company made it worth our while! 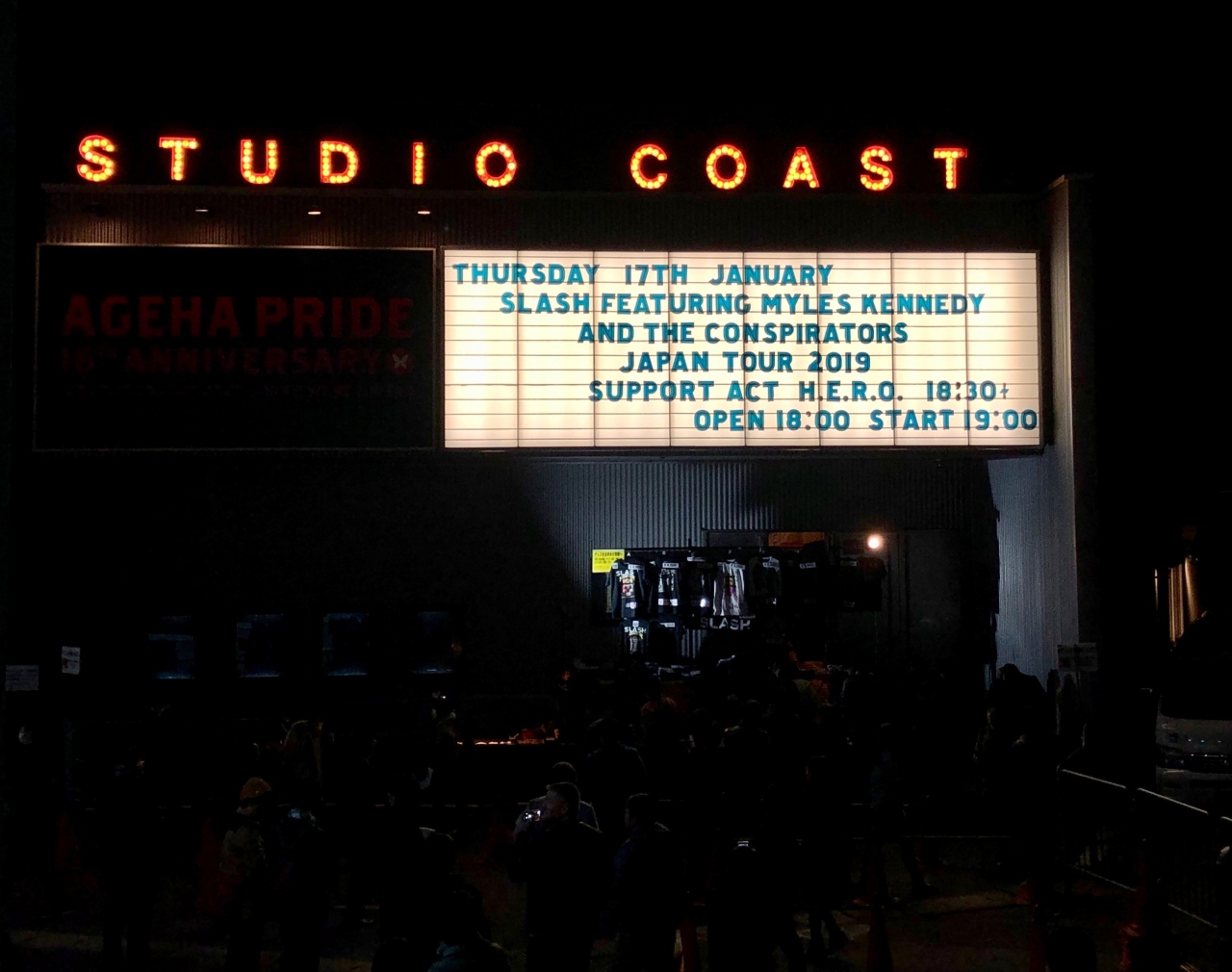 I’ve been to three different rock shows in Japan in the last six months and all three were a different experience. The Ace Frehley show was held at Tokyo Billboard Live, a small club located on the fourth floor of a skyscraper in the center of Midtown Tokyo with approximately 500 seats. Concert t-shirts were not available to purchase. No pictures were allowed and this rule was strictly followed by all in attendance. I ordered food, had a few beers, and only stood for the songs I liked, as did everyone else. Judas Priest was held at Musashino Forest Sports Plaza which seats 10,000 people and drinks were not allowed in the arena, but you could buy them in the lobby for a limited amount of time; they quit selling drinks when Priest hit the stage. Everyone stood for the first song and did not sit down until the last encore song finished and concert t-shirts were available to purchase outside the arena.

Slash featuring Myles Kennedy and the Conspirators was a completely different experience. It seemed as though all rules were tossed aside and everyone just rocked! Shinkiba Studio Coast is an industrial waterfront space that holds about 2,400 people and the night of Slash it felt like 5,000 people had been smashed into the space! Pictures and video were allowed and concert t-shirts were sold before and after the show right outside the building. The drinks flowed freely and it was mandatory to purchase at least one drink ticket upon entry. Interesting fact: You still had to pay money for your drink as the drink ticket only covered part of the cost! People on the floor stood the entire show and those of us in the balcony sat and stood when we wanted. The place was rocking from start to finish and only seemed to get more crowded as the show progressed into the night. In fact, it became so crowded that my wife and I formed an escape plan in case of emergency!

The show was fantastic…Slash was in the zone, Myles sang like there was no tomorrow, and the Conspirators rocked our world. They opened with “The Call of the Wild” from the Living the Dream album and never let up. My favorites from the evening were the Velvet Revolver cover “Fall to Pieces”, “Driving Rain”, “Great Pretender”, and “Anastasia” (which was the last song of the encore). My all-time favorite of the evening came when Slash and company launched into the GNR cover “Nightrain”. Slash wailed on the guitar and Myles sang it flawlessly…it wore me out! Slash stroked his guitar for a little more than two hours and never hit a sour note. We left Studio Coast with our ears ringing and boarded the “night train” back to our hotel, appeased by the rock-n-roll gods. 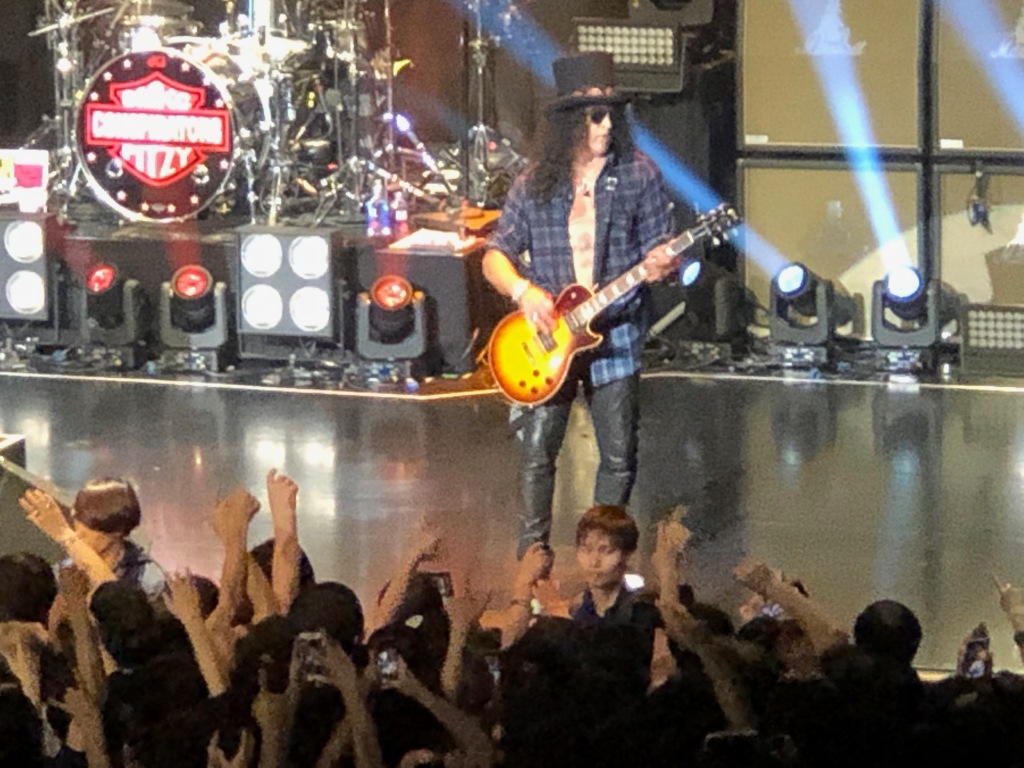 But our Tokyo adventure was not over. Tomorrow Sumo! Look for that in Tokyo Part Two: Sumo!