From the first clanks of the cowbell that lead to the crunch of Eddie’s guitar, “Dance the Night Away” gently explodes into the air and announces the arrival of a classic rock tune. I have been a Van Halen fan since the release of the first Van Halen album. I  read Noel

Monk’s book, Runnin’ with the Devil, which is Monk’s account of being Van Halen’s manager in the early days up to the exit of David Lee Roth, and I almost wish I had left it unread! It does not paint a very good picture of the Van Halen brothers or Dave and it was hard to read about some of the behavior and addictions of musicians I admired, even though I already knew their behavior was questionable. The only band member that comes out squeaky clean in the book is bass player Michael Anthony, still known as the “nicest person in rock-n-roll”. Alex, Eddie, and Dave really mistreated him. My advice to Michael?  Stick with Sammy! Now that I have mentioned Sammy Hagar, I have to discuss Van Halen with the Red Rocker (Gary Cherone is a Van Halen non-factor). 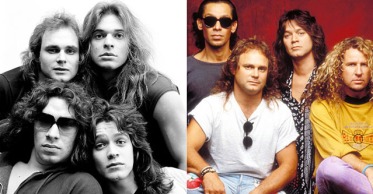 I can’t stand when fans and critics try to compare the two band lineups. Van Halen is a completely different band with Sammy Hagar. Different singers bring a different sound and the band was more musically diverse with Sammy than they were with Diamond Dave. I like both singers and both lineups of the band, but my first love will always be the original Van Halen! So, I give you my Top Ten Van Halen songs! Let the debate begin!

Yeah, no “Runnin with the Devil” on my list. I do not discount its importance in the Van Halen catalog, just not a favorite of mine.