After a nice breakfast and morning family chat, we were back on the Shinkansen and headed to Kyoto, one of the ancient capitals of Japan. Upon arrival in Kyoto, we stored our luggage and boarded a local train for the trek to Nara, another ancient capital to experience Todaiji Temple.

Todaiji Temple (Great Eastern Temple) is one of Japan’s most famous temples, which houses a big bronze Buddha statue that measures over 15 meters high (just under 50 feet!). The Big Buddha is housed in a large wooden structure, Daibutsuden (Big Buddha Hall). The temple was built in 752 and its power and influence became so great, the capital was moved to Nagaoka in 784. The power may have left, but the deer remain! There were deer all over the place! Most of them were very docile and gentle…until you bought the special formula deer crackers that venders sell. As soon as the deer population became aware of our crackers, they tracked us down and relieved us of every morsel. It was there, with the Nara deer, that Mike’s true calling as the Deer Feeder became public knowledge!

And the rain kept coming! The rain pounded Nara and the temperature remained hot! We headed to Kasuga Taisha Temple, a short walk from Todaiji, to view the famous stone lanterns. There are believed to be over 3,000 stone lanterns at Kasuga Taisha and they illumine the temple twice a year in February and August. The lanterns did not shine for us, but they were saturated in moss and rain! Very picturesque as people in kimonos and deer walked among the lanterns. 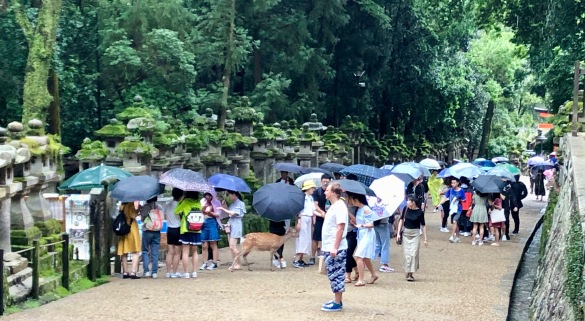 Back on the train and back to Kyoto. We arrived in time for dinner. After a long search accompanied with some “hangry” attitudes, we found a nice little Italian restaurant. Billy Joel would have approved our little “scene from a Japanese Italian restaurant” as the grumpiness faded away with consumption of great food, drink, and conversation.

The next day, we were up early and on a bus touring the temples of Kyoto. It was a “hop on and off bus” and we could spend as much time at each place as we desired. Our first stop was Nijo-jo Castle. Nijo-jo was the castle890 where the fifteenth and last Shogun Tokugawa Yoshinobu surrendered his authority to rule Japan to the Emperor, bringing 700 years of Samurai rule to an end in 1867. Then we were off to Kinkaku-ji Temple (Golden Pavilion), one of Japan’s most celebrated sites. It is a beautiful temple covered in gold foil. Very picturesque. Our last stop was Kiyomizudera Temple (Pure Water Temple) derives its name from the waterfalls on the temple grounds that are considered to be very pure and sacred healing waters.

We packed a lot in on our last day in Kyoto and we were exhausted by nightfall. When morning dawned, we were back on the Shinkansen and headed to Hiroshima and Peace Memorial Park and Museum. And to meet up with our good friends, the Rapleys!