I was recently watching an Andy Griffith Show episode entitled “Opie the Birdman”. Opie accidentally kills a bird with a newly acquired slingshot. Andy discovers the  transgression and Opie’s punishment is to listen to a nest of baby birds in the tree outside his bedroom window chirping for a mother that will never return. The responsible Opie decides to care for the birds, because he was the cause of their current motherless state. He raises them and eventually has to return them to the wild. He turns to look at the empty cage and states that it looks “mighty empty Pa”. Andy simply replies, “Yes, but don’t the trees seem full!” As I watched this unfold before me, I found myself thinking about Thumper.

It was late Spring 1976. I was twelve, Brian was nine, and hay season was upon us. According to my parents, we were too young to drive tractors or cut or rake high, even though we knew friends our age and younger with a couple of years experience doing both.  We were tasked with other chores on our little farm: feeding the cattle, pigs, chickens, and re-stacking the hay leftover from last year to make room for the new hay bales we would have in about a week. As we tended the livestock, my mother and father were in our field up on the hill, across from the Fitzpatricks, mowing down stalks of brome. As Brian and I finished up chores, our old Chevy pickup truck came barreling up our driveway.

When my father stopped the truck, my mom exited with urgency. “Boys! Come here, quick!” We ran as commanded and stopped abruptly at the sight of her blue plaid work shirt. It was stained with blood!

“What happened Mama?” I asked.

“Are you bleeding?” Brian added.

“I’m fine, but the baby rabbit I’m holding is injured.”

“I did not even see the nest of rabbits as I was mowing,” my father calmly stated as he walked around the front of the pickup. “This rabbit your mother is holding is the only survivor. He’s chewed up pretty bad. Not sure what we can do for it,” he stated as he calmly walked to the barn.

My mother held the tail of her shirt like she had wrapped fine china in it. “Greg, go get me some towels.”

“Yes, Mama.” I sped into the house and grabbed the first towels I saw, which were folded neatly on the washer ready to be put away. “Here ya go.”

“Not my good towels, Greg! Go find some old, ripped up ones…like we use to wipe the dog’s feet when it rains.”

“I know where those towels are!” and with that, Brian started to run to the house.

“Hey!” I shouted, “take these back with you!” I threw him the unwanted towels.

“You got it.” And he was back in no time with a couple of old, frayed towels.

My mother opened the tailgate of the pickup and gently removed the injured rabbit from her shirt and placed it on the towel. It had several cuts on its side and a couple of toes seemed to be missing. Most of the blood seemed to come from the back legs and those missing toes. She wrapped it in the towel, picked it up, and started walking into the house.

“Is Thumper going to be okay?” Brian asked as he tried to match strides with our mother.

“Thumper?” my mother questioned as she walked.

“Yeah, I just thought it would feel better if we gave it a name,” Brian replied as he looked up at her with hope in his voice.

“Good idea,” I added as I slapped my little brother on the back, causing him to almost lose his balance.

“It’s not a pet boys. And Kaye,” my father proclaimed as he approached from the barn.

My mother stopped at the screen door that led to our laundry room/porch and turned to look at all of us. “We are the reason this baby rabbit is in need of care and we are going to take care of Thumper for however long it takes. I know and the boys know,” as her audience suddenly became just my father, “that this rabbit is not a pet and will not be a pet.” She now looked just at my brother and me, “Thumper will have to be released back into the wild once it is healthy enough to survive on its own. Right boys?”

Brian could not take his eyes off of Thumper. “But what if…”

“There are no ‘what-ifs’ boys. Brian, do you understand your mother?” my father questioned.

Silence and then a muted reply, “Yes Mama. Yes Daddy.” With that, my mother turned around, opened the door, and took Thumper into the laundry room.

“I’ll get a box of some kind and some first aid supplies. Greg, come with me and get some straw from the barn so the rabbit can stay warm,” as my father took charge of the situation. We had everything we needed, but once my father and I returned with the supplies, my mother, who had always wanted to be a veterinarian and had the knowledge of a couple of years of animal science classes from Kansas State University supporting her, took over.

Before I knew it, Thumper was in a box lined with straw and towels as my mother went to work on the bloody wounds. She cleaned and irrigated all of the cuts and scratches, and although a couple of toes were amputated by the mower, he still had full mobility. Once the wounds were clean, she sprayed an antiseptic on them that turned his fur purple around the wounds, hence the name we called it “Purple Spray”! I can’t remember the actual name of it, but it is the purple antiseptic spray that a lot of farmers used when they castrated pigs. My mother also used some good ol’ Watkins salve on Thumpers back feet where his two missing toes used to be and wrapped them in gauze. Before my father could protest, Thumper was in a box on top of our green dryer and that is where he would remain to rest and recuperate.

My little brother and I cared for Thumper while he healed. At first, when we changed his bandages and fed him milk replacement using a plastic syringe like an eye dropper, he would shake in fear. As the days went by, Thumper became comfortable with us. In between feedings and dressing changes, my brother and I would pet him and hold him in our laps. My mother also participated in this nurturing routine. In fact, she was the one who decided to put Thumper’s box on the floor and let him have free run of the laundry room after a couple of weeks! “The more we love Thumper, the quicker he will heal,” she explained.

“Don’t go getting attached to that critter boys. It has to go back to the wild once it is able. That goes for you too Kaye,” my father would often remind us. His reminders were often harsh, but the fact that he always patted Thumper’s head told all of us that, deep down, he liked the little rabbit.

And so, after a month of care, Thumper was healed; minus a couple of toes. My mother came to Brian and I one day while we were feeding Thumper. The look on her face was a mixture of happy and sad.

“Well boys, today is the day. I think ol’ Thumper here is well enough to release back into the wild. What do you guys think?” my mother inquired gently. As if on cue, Thumper looked up at us and gave us a twitch of the nose.

“He does seem pretty healthy,” I acquiesced.

“But he also seems pretty happy with us!” Brian added. “Maybe he wants to stay.”

“Well, I think he is ready. Tomorrow we can pick out a good, safe place near the timber to release him back to what he knows best.”

Brian had a tear in his eye and so did I. “I don’t want Thumper to go,” he finally said and I nodded in silent agreement.

“Honey, we talked about this. He needs to be back where he belongs. He’s probably got some relatives out there and they’ve been wondering where he’s been. Don’t you want him to be happy with the rest of his rabbit cousins? And able to run free and play with them?” Our mother was really selling this so we would willingly and happily let him go. We really had no choice. Thumper had to be released back into the wild.

The next day, I carried Thumper in his box to the truck and all four of us headed to our field across from the Fitzpatricks. My father turned off the dirt road and drove down the waterway and stopped.

“This should be a good, safe spot for the rabbit. The timber is just there and the creek is close. He’ll be fine here,” my father said as he canvassed the area. As I think back, I wonder who he was trying to convince, all of us or himself.

“Yep, this place looks good,” my mother stepped in and gently lifted Thumper out of the box. “Goodbye Thumper. I’m glad we got to spend time together.” She handed the rabbit to me. “Greg, you and Brian go over there with Thumper so I can take your picture.” 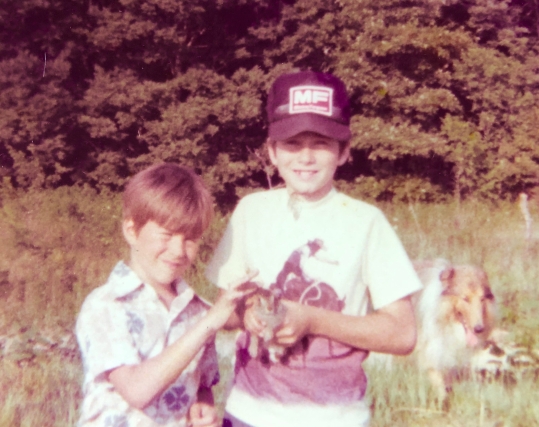 Brian, Thumper, and Me the day we released Thumper back into the wild! Effingham, Kansas. June 1976. Photo by Kaye Vessar.

Brian and I took a few steps and turned for the camera. I held Thumper and Brian would not stop petting him. My mother took the photo. Brian and I said goodbye to the rabbit that consumed our lives for the past month.

“Okay, it’s time to let the rabbit go,” my father urged from the truck.

“Boys, you’ve done a good job of taking care of Thumper. He will be fine,” my mother added. “Set him down and step back.”

“Let’s take several more steps back boys and see if he leaves,” my mother proposed. “If you love something, set it free. If it comes back to you, it’s yours and if it doesn’t it was never meant to be.” My mother mumbled one of her favorite quotes as we watched the rabbit we cared for deciding between us and freedom. He hopped around a bit, but was still choosing to stay with us. Then, he made his decision and began to hop farther away from us. He decided to return to the wild. He hopped several feet away from us and then stopped. It seemed as though he was looking back at us. Thanking us for taking care of him and then bringing him back to the field. Now, at this point you may be thinking, ‘Really? Stopped to look at you? You’ve been watching too many Disney movies dude!’ But I tell you the truth, Thumper paused and looked back. It is a moment I will never forget. Then he hopped off into the timber to live his best rabbit life.

After our experience with Thumper, for the next few months, every time we saw a rabbit out in the field or even our backyard, we always thought out loud, “Hey it’s Thumper! He came to say hello!” It could have been any one of a thousand different rabbits, but to us, it had to be Thumper!

And we still remain.